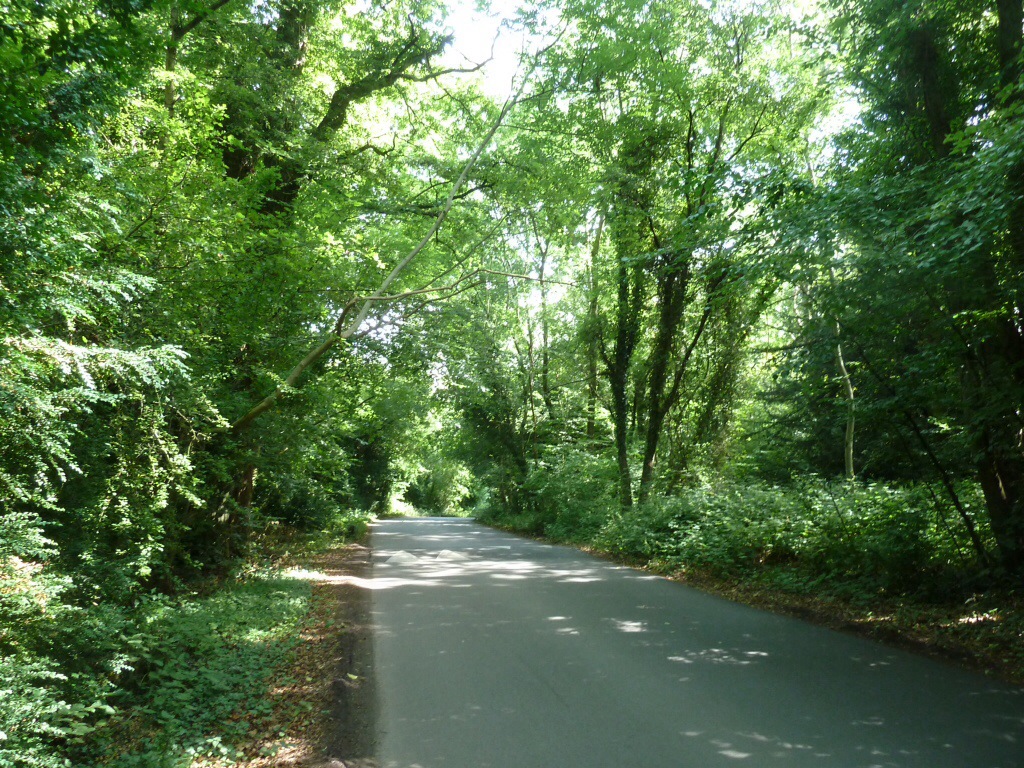 A beautiful, clear morning as I rode out to Blackfriars had clouded over by the time I reached the station. Over the next ten minutes or so, I was joined by three riders from Kingston Cyclists, then a Bromley rider, then two Lewisham rides regulars. The seven of us obtained our bargain tickets, £5.60 each. I was surprised to receive only one ticket for the groupsave deal…this seems a new system to stop groups separating on to different trains for the return journey. I don’t understand this, really. Surely, the idea of groupsave is to encourage people out on to emptying trains at off peak times. If occasionally a group has to split for some extenuating reason, like last week on our Surrey Hills ride, when one rider had to return early, I can’t see that being a big problem for the train company. The saving has been reduced too, from half price to a third off.

But this is a ride review, not a public transport rant!

The inspiration for this ride came from Jack Thurston’s book, Lost Lanes. He starts his ride at Knebworth, but a little tweaking here and there makes it much more practical for us South Londoners as the train links to Harpenden are so much better.

At Harpenden, we were joined by Alex and Natalia. So nine of us rode out of Harpenden on the road, not the cyclepath. On the recce, the recent rains had rendered this very muddy, so, as we were all, apart from Natalia, riding road bikes, some with very skinny tyres, I decided not to use it.
We turned off the busy Wheathampstead road after a mile or so, on to a quiet lane which dropped straight down to the valley of the River Lea. There is an extensive network of quiet country lanes between the major centres of Harpenden, Welwyn, Hitchin and Luton, and we were about to wend our way on a circular route using many of them.
The roads were reasonably busy, but not with cars. Horses and bicycles, transport much more suited to a quiet, misty autumn morning.

We rode, fields on either side, ploughed up now and mostly empty of crops, the terrain rising and falling but much more gently than on the Kentish roads we generally frequent. In and out of little copses of trees, still leafy and in beautiful autumn colours, but a good deal of that leaf cover on the road below, wet and slippery under our wheels requiring a bit more caution than usual, especially on the descents.

Soon we were in Ayot St Lawrence where we stopped to view Shaw’s Corner, where GBS lived for many years. Then back on the bikes, past the village church, with its ruin still standing in front of the rebuilt version, and then on through a mixture of farmland and woods, the autumn mist gradually thickening all the while.

We passed the grounds of Knebworth House, site of many a massive rock concert in the past. The grounds and lodge, quiet and empty now in the deepening cloud. One of our group recounted how he had attended a Led Zeppelin concert there years ago, a lone punk in a sea of denim.

On towards Whitwell, home of Emily’s Cafe where we have stopped in the past. But it was too early for lunch so we pressed on. At the crossroads in St Paul’s Walden stands the Strathmore Arms, a great little pub that, sadly, doesn’t do food on Sundays. Here, Natalia said that she needed to stop. At first we all agreed to take a break. But after a chat with Natalia and Alex, it became apparent that she was finding it hard to keep up on her very beautiful mountain bike and wasn’t really enjoying it. Having just borrowed a mountain bike for some off roading I am keen to do, I knew how much those knobbly tyres slow you down on the road and how much harder you have to work. They didn’t think she would manage 40 miles. Luckily Alex lived locally so knew the roads and we said our goodbyes.

NB. Mountain bikes really slow you down on the road…if you want to use it on a road ride, fit smoother, slick tyres and lock out the front suspension (if you can). And be aware, you will have to work harder to keep the pace, even on our rides, which aren’t particularly fast.

We carried on up the longish, gradual climb, then down a long, sweeping descent before turning into a quiet wooded lane, peaceful, the mist gently deepening all the time. Back up into Preston village, we decided to press on, even though it has a very welcoming looking pub on the village green, aware that the mist was beginning to affect visibility. By the time we got to Great Offley, we needed refuelling, so stopped at The Red Lion. Although it was very busy, we managed to find a table and seven seats next to the huge log fire. Lunches were ordered, served really quickly, eaten, and in just under an hour, we were back on the road. A proper old country pub, cheerful, friendly but efficient service, decent, simple, filling and reasonably priced food. Recommended.

Twelve miles only left, now, light rain falling and the mist thicker than before.

I had already chopped the off road section from this ride, that takes you up to Deacon Hill on the Icknield Way, as a recce ride had proved conditions too wet and muddy for road bikes with all the rain. Although I hadn’t wanted to shorten the ride, the conditions today made me glad I had. The beautiful views gained from those extra miles would have been invisible anyway.

So we headed back towards Harpenden, now, still on these quiet lanes through a mixture of wood and farmland, rolling hills. A climb up Chalk Hill, that usually yields terrific views just took us deeper into the mists. But this had its own charm, lending the ride a different atmosphere, autumnal and mysterious.

A few more ups and downs and then we were on the last descent down to a crossing of the busy B road that links Luton and Harpenden in the Lea Valley. There we picked up the cycle path that runs alongside the river and were back at the station in no time, only to find it packed with cyclists. A CTC ride. We decided to have a coffee nearby, rather than try to cram our bikes on to the same train. There must have been about twenty of them. Trains to Blackfriars are frequent, even on a Sunday, so this wasn’t a problem.
Once back in London, some opted for another train to South London, some the pub, whilst I rode back alone. Thanks to everyone who came along…great to meet some of you for the first time and hope to see you all again soon on another ride.