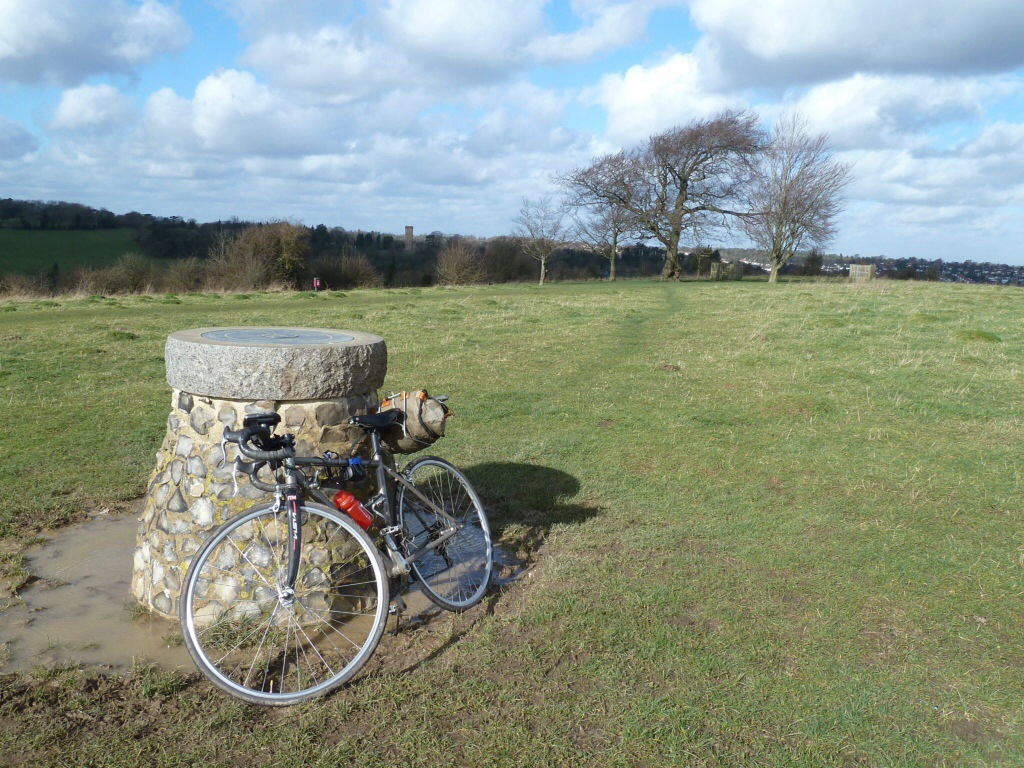 Seven of us headed up out of Coulsdon on to the lovely Farthing Down. The weather looked good but we had all brought waterproofs, prepared for the forecast showers. At this point, it looked as though the forecast was wrong. Beautiful blue skies, bright sunshine giving us terrific views all round.
On to Chaldon and then a fast descent down to Spring Bottom Lane, and then further south to cross the M25 heading through Bletchley, on to Outwood to ride past it’s pretty common and windmill. That was as far south as our route took us, and we began our route back to London. Quiet lanes, wooded hills, peaceful hidden villages.
After crossing the M25 on another elevated bridge, we hit one of the toughest hills on this ride. Gangers Hill, one with a steep twist that we all managed to get up one way or another. Then on to the ridge of the North Downs, and our first shower, which passed quite quickly. We descended Titsey Hill, happily with the roads now dry, as this is a steep and fast descent and headed along the Pilgrims’ Way east wards. A few minutes into our glide along this lovely road, the rain began again. Another shower, but this one long and full on stair rod rain. We had all managed to pull on our jackets in time, but all of us were soaked from the hips down when this whopper finally decided to move on. The sun came out immediately and began to dry both us and the road out, steam rising from the route before us. However, we decided to get to the pub as soon as possible so headed up Hogtrough Hill, instead of Sundridge Hill, Our original choice to cross the North Downs. It meant we got to our pub stop in Cudham a bit earlier. Here we dried off over a fairly decent lunch only to emerge, warm and dry, into another shower. Mercifully a short one, and ŵe descended Cudham Hill and then up to Downe. From here it’s a short well ridden road down Jackass Lane, through West Wickham and Beckenham Place Park and back to South East London.
Despite the few short rain bursts, we had a great time, largely due to, once again, the quality of the company. Easygoing, laid back bunch of people, out to enjoy each other’s company as well as riding the bike.