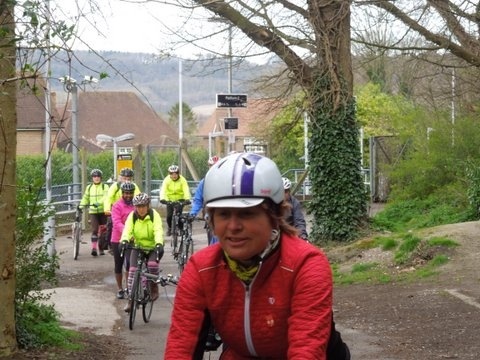 Andrew’s Cheese Run route covers some of my favourite bits of Kent as well as a few lovely lanes I am not so familiar with…often the way with Andrew’s rides…I think I know the area he’s leading us through and then he turns off down a beautiful little lane that I haven’t yet ridden, even after 30 odd years of exploring this area on my bike.  So, despite the horrid forecast, I decided to ride out through SE London and head down to Otford, to meet the rest of the group, most of whom had trained it down, apart from Steve and Tessa, who also rode out.

The ride down was pretty good…clear, cold spring morning…the view from Blythe Hill Fields (one of the best in London, I think) was stunning, the birds in Beckenham Place Park were madly singing their hearts out, a crazy woodpecker, although unseen by me, was betrayed by its loud, incessant battering of some poor tree.  I side stepped Bromley by continuing on this route through Shortlands, crossing the railway over the footbridge, with its shiny new bike channel fitted to the steps.  I didn’t use it as, for going up, it’s on the left hand side and I’m right handed.  The down one was also on the left hand side.

Then down Hayes Lane, through Norman Park and out onto Southborough lane. Nipping through the car park in Petts wood to take advantage of another railway footbridge, then back on the straight run through suburbia.

I found myself musing to myself, as I often do riding solo.  On this occasion about why these wider roads through Bromley, with their huge pavements and big grass verges couldn’t accommodate an off road cycle lane.   The traffic wasn’t heavy at this time on a Saturday morning, but what there was often passed too fast and on a few occasions, dangerously close.  Sometimes these roads are easier to ride when the traffic is heavy.  The speeds are restricted by the traffic volume, consequently you are much safer on your bike.

Anyway, once over the A224, it’s not far till the houses and shops begin to thin out and you are riding down quiet lanes, lined with green fields, particularly lush after the deluge they have absorbed, and woods, where the little green shoots of bluebells are already peeking through the leaf litter.  A bluebell ride needs planning fairly soon.

Once the M25 is behind you, and the incessant monotone hum of the traffic fades, you feel much further away from inner London than 15 miles or so.  I began to realise I would be a bit early to meet the train on which the others were arriving, so, as I rode through Shoreham, I decided to take Filston lane, a lovely quiet glide along the Darenth Valley and head down to Dunton Green, before heading back up to Otford.  An extra five miles on to my 20 mile head out route on this lovely morning was no real hardship.

I approached Otford from its High St,  which I haven’t done for quite a few years…and was reminded that it’s quite a pretty village, with its village pond and green  surrounded by cottages, a fine Georgian house and attractive church .  At this early hour on a Saturday, anyway.  A couple of hours more, and it would be choked with traffic, its character swamped by traffic fumes and noise.  One of the reasons I tend to avoid it on rides nowadays.

I arrived at the station with enough time to spare to get a coffee from the stall on platform 1.  The rest of the group turned up not long after, and then we were joined by Steve and Tessa, who had ridden from Bromley. The ride proper had begun! There’s a steep climb from Otford Station to join the Pilgrim’s Way, but it’s very short.  Then along the ridge for a couple of miles before swooping down again, across the motorway, the railway through the quirkily named Noah’s Ark…anyone know why this bit of Kemsing is so oddly named?  My googlefu has failed me this morning.

A relatively flat bit here before the lumpy, bumpy bits started again as we headed through Stone St,  Ivy Hatch and past Ightam Mote, the beautiful moated mediaeval house, visible clearly for a few moments from the road as you sail downhill past it. Riding the route in this direction  gives more glide down in return for the little climbs along the way.

We stopped at the beautifully carved bench in Dunks Green so John could indulge his almost constant overwhelming urge to photograph us again. Still looking happy…Vigo Hill closer now, but we have obviously forgotten about it at this point.

Then back on the road, soon heading northwards to Trottiscliffe which seems to lose a lot of consonants and possibly a vowel or two between writing and speaking.  Trosli or something like that, I think.  Then, the toughest climb of the day began to make its presence felt, but oh so lightly at first, as the contours of the road begin to rise.

There are steeper hills in Kent.  Vigo is an old money 1:6 which is, I guess, just under 20%.  But, we were hungry by now, we had all ridden quite a way, including a fair bit of climbing and Vigo has quite a long, not particularly steep, but surreptitiously energy draining, run up to it’s real killer punch of ascent, and you can’t quite see the end of it, which hides behind a rather dark and forbidding bridge, and is bordered by steep wooded banks, till it’s practically done, which is psychologically not helpful. My technique is to get into low gear, and go up slow, slow, slow.  It works for me.  Just! It took a while but all made it safely to the top, where some of us (including me) needed a bit of a blood sugar top up in the form of a quick munch of cake.

Then on to carry out the main business of the day, cheese buying.  Winterdale Shaw Farm sells raw milk, its own free range eggs, and makes its own delicious  cheese as well as selling products from other traditionally working organic farms.  It is set in a beautiful Kent Valley which looked at its best today, rich green fields, spring flowers in the meadows and buds beginning to burst on the trees. Our leader complete with cheesy purchases in hand. As the cheese buying drew to a close, we were all feeling pretty hungry, but lunch had been well planned by Andrew, close by at the Black Horse in Stansted.

A pleasant bowl of soup and some chips later, I, along with everyone else, was ready for the off again. No more mega hills but a few ups and downs, through more very pretty Kent lanes, orchards to our left and right, just about to burst into leaf.

Most of the group were heading back to Eynsford for the train. One of the best ways to end a ride here is to head down the Knatts Valley and that’s just what we did. Its maybe three miles of glorious valley riding, with just a touch of down in the gradient. Beautiful. It’s a spacious, wide valley, with a great big sky feeling, especially on a beautiful day like this one.

The end brings you up to the junction just outside Farningham and rather than take the busy A225 to Eynsford, we opted for the quieter road through Farningham village, which flows down to the Darenth, then back up to the ridge road which takes you to Eynsford. That last extra climb is worth it for the wonderful view of Eynsford and the river valley below.

As we descended to Eynsford I called out a goodbye and turned off down the Crockenhill Rd to head back to London by bike…I had been tempted by the train ride, but the threatened rain showed no signs of arriving yet, the sun was still shining, the birds still singing, so the ride back seemed like a good idea. And luckily for me, the rain stayed away for almost the whole return journey.  Apart from the last half mile as I rode along the Waterlink Way in Ladywell Fields, when the heavens opened and soaked me in about 2 minutes flat! Home and a hot shower were well appreciated.

Thanks to Andrew for a great route and everyone else for the great company.