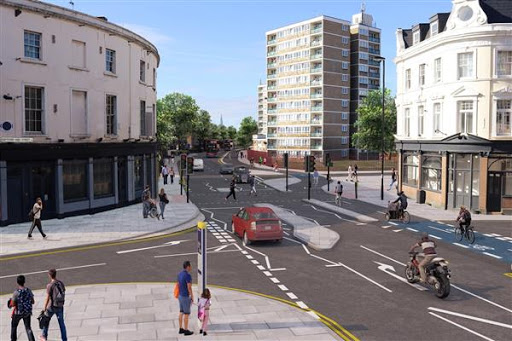 Lewisham Cyclists’ members have been asking what’s happening to the Lewisham section of Cycleway 4 (C4) now that the Rotherhithe to Tower Bridge route is open. The short answer is it’s coming, but Covid has disrupted the original schedule. Lewisham Cyclists are pressing TfL for updated construction dates. Read the full blog below to find out more….

Cycleway 4 (C4) has been a long time coming in South East London. Originally identified eight years ago, history buffs can follow the ebb and flow of this project here and also at Transport for London’s (TfL)  consultation page. Our neighbours Southwark Cyclists also covered the opening of the first section.

For those unfamiliar, C4 is the high quality, continuous cycle route between Tower Bridge and Greenwich primarily being constructed along existing main roads (previously known as Cycle Superhighway 4). 2020 was a year of considerable change to the program with the impact of COVID-19 both in the way people travel, but also on the finances available to TfL.

As such the Cycleway 4 programme has seen significant change; in terms of the interrupted schedule, but also a bonus in an extension now taking shape beyond Greenwich towards Woolwich.

After being halted by the pandemic, two key construction milestones were finally reached late last year; the opening of the route from Tower Bridge Road to Rotherhithe roundabout, with the completed section shown in the video below.

In addition to this is the opening of the Tanner Street Cycleway, which connects C4 to Cycleway 14. This provides a safe protected cycle route to existing routes such as Cycleway 7 at Southwark Bridge, Cycleway 6 at Blackfriars Bridge and in turn, to Cycleway 3 at Embankment. Cycleway 14 also connects C4 to some key locations such as Guy’s Hospital, providing a safe route for keyworkers to get to work by bike, avoiding public transport and associated risks during the pandemic.

This has created a high quality and already well used route from Rotherhithe Roundabout directly to the North-South Superhighway (now known as Cycleway 6) on Blackfriars. Construction has also started on ‘build section 4’ which is the 750m section running from Deptford Church Street to Norman Road. Construction is progressing, with the route beginning to appear at Deptford Church Street and running down Creek Road towards Greenwich. You can see in the map below what has been completed, where there’s still work in progress and what remains to be done.

The traffic order has been published by Lewisham Council, and we have seen the following works orders from TfL.

Similar questions also remain regarding the Rotherhithe Movement plan and construction of C4 on Lower Road. The original plans from Southwark Council included removing the notorious gyratory around Surrey Quays station, although it now looks like C4 on Lower Road will be implemented with the gyratory still in place. You can see updated plans from Southwark Council here.

Our expectation now is to see a scheme along Evelyn Street and Lower Road which sees a two way cycle track with a combination of the original consulted scheme (Evelyn Street), along with wands and/or bolt down kerbs (Lower Road) providing a fully segregated route from motor traffic. We are hopeful that the junction treatments in particular are similar to what was originally proposed back in 2017 at consultation.

TfL in cooperation with Greenwich Council have opened the first of 2 Schemes funded by the London Streetspace Programme, which will link the Old Royal Navel College with Anchor and Hope Lane (just east of Charlton Sainsbury’s) and have included significant works to provide a crossing of the notorious Angerstein Roundabout (pictured below). You can see a video below showing what has been constructed so far.

On multiple recent visits to the scheme, it was noted that a wide variety of users including large numbers of families were using the newly opened sections. Which gives real confidence that a similar in nature scheme will also provide good results.

We are expecting works to begin on Evelyn Street imminently and will be updating this blog over the next few months. TfL have stated from the outside that this would be a temporary scheme As always, we would love to hear people’s views on new infrastructure, so feel free to get in contact with us if you want to feed back.

Acknowledgements: Thanks to Andrew Seeds for photos and text, Luke Beaumont for the videos.