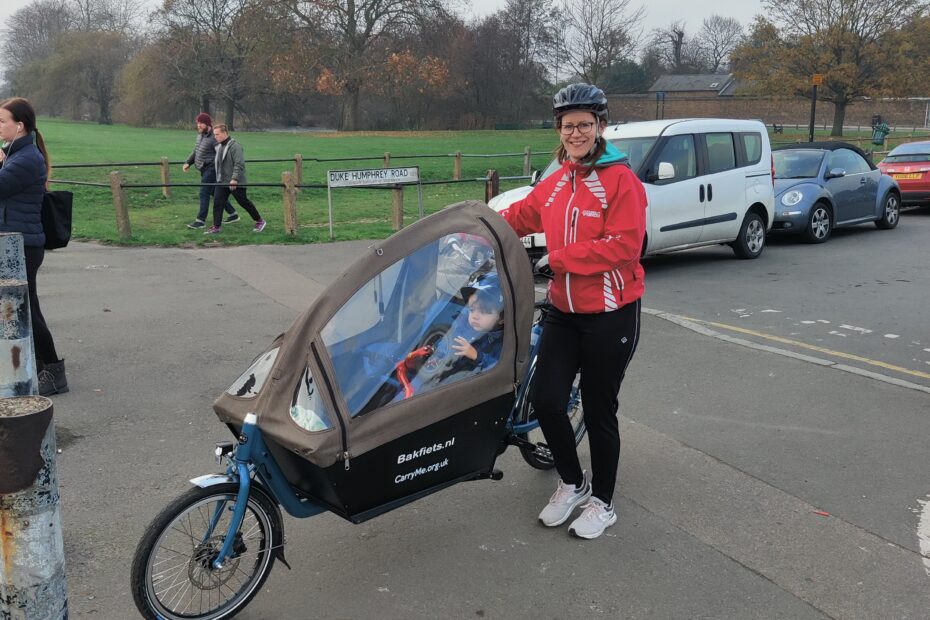 Ever wanted to cycle with your family but don’t know where to start? Want to join the increasing numbers of people cycling with their children in lockdown? Well this post could be for you!

Climate Action Lewisham, working with Lewisham Cyclists have recently successfully bid for grant funding from Transport for London to set up a Family Cycling Library here in Lewisham, similar to one currently running in Hackney. There’s also a useful youtube video here explaining how it works.

You can register your interest for the Lewisham Family Cycling Library here on Climate Action Lewisham’s website.

How did you get started on cycling with your children?

As someone who has more-or-less always cycled, Mike was interested in discovering how having his daughter Iris with him changed his view of what is an acceptably safe environment to ride in. Mike got Iris a bike seat when she was around 16 months old – she seemed to be happy with it straight away, so it may well be that others have successes with younger children.

Having another way to get around, as well as using a bike ride as something to do together, has been really valuable for Mike and Iris over recent months. They don’t have a car, so cycling gives them more options of places to go out to. Given Iris often calls out “bike!” when Mike is getting her dressed or ready to go out, he feels she enjoys the adventure of it.

Anna and Ben have always cycled and feel confident on bikes. They decided to invest in a Bakfiets cargo bike. They also have a car, but find they use bicycles more often, getting to most places like swimming, music lessons, and shopping by bike.

Alex first took Ethan out cycling when he was 13 months. Some parents start younger and put their babies in trailers or rear seats, but Alex had a front facing toddler seat so Ethan could see where they were going. At first they didn’t use a windscreen but when it got to autumn, Alex found the cold wind was making Ethan a bit snotty so they started using one – the seat they bought had a windscreen as an option. This worked well and meant they could ride together further.

To help Ethan start cycling on his own, Alex took him to the astroturf cricket strip (a firm yet forgiving surface) in Chinbrook meadows with a balance bike. At first Ethan was mainly just standing, now he can do about 1km or so.

Ethan really loves his balance bike, and before the latest lockdown, they went to balance bike sessions at Herne Hill velodrome for 2 – 5 year olds.

What kind of bicycle(s) do you use to get around with your children?

To cycle more comfortably and further with his family, Alex borrowed a cargo bike and gave it a go. His son loved it and was far more comfortable in it than on his seat. The cargo bike solved a lot of problems – they can put all Ethan’s things, including his balance bike, in the box, and cycling, – especially uphill, is easier when the motor kicks in – so they got their own, from Carry Me Bikes in Hackney, who have rent-to-buy deals.

With a growing family, it took Anna and Ben time to find their optimum cycling set up. When they had three children they all went in the box in the bakfiets cargo bike – it has two benches so they all fit. When their youngest came along, they fitted a frame for a baby seat in the box so Anna and the baby could get around, and two other children could also fit in. Now the oldest three are in the bakfiets while their youngest goes on Anna’s bicycle. They’ve also tried using a trailer but it didn’t work for them as the children felt too low down and far away.

Mike’s daughter, Iris, sits on an Urban Iki rear seat which attaches to the rack on the back of Mike’s bike. It has its own footing, to which the seat clicks in and out, so it’s easy and quick to remove or reattach. Iris seems happy and comfortable in there; it’s simple to get her in and out of the seat, and is secure enough to give Mike confidence she’s not coming out.

How could cycling in Lewisham be better?

Anna says what Lewisham really needs are segregated cycle lanes, apart from motor traffic, so children could cycle to school safely. Anna cycles to work in east London and uses cycle superhighway 2 which is mostly completely segregated – she’d love her family to have something like that in Lewisham. Anna would encourage Lewisham Council to install cycle lanes and more low traffic neighbourhoods in the borough. There are lots of other things that could be done too, like CPZs around schools, schools streets and also more low traffic neighbourhoods.

Top tips for cycling with your children

You don’t need to spend a lot when cycling with children. Second hand seats aren’t expensive, balance bikes can be hired, and even cargo bikes can be relatively inexpensive on rent-to-buy schemes (especially when compared with running a car).

A balance bike can be hired from The Bike Club for £5 a month, and when your child outgrows it, it can be returned for the next size up.

Mike thinks sitting on the back can be quite a passive experience for Iris, so he tries to keep it as engaging as possible by talking about the things they see, or by singing songs. It can also be a bit sedentary for Iris, which may be more of a problem in the winter months. This generally means that if a ride goes on too long complaints begin to be voiced. Mike finds he has more success if an inordinate amount of clothing is applied to Iris first in cold weather!

Lewisham Cyclists also have popular family rides (currently suspended due to Lockdown) which can be especially useful when you’re starting out; you don’t have to worry about planning a safe route and you get to meet other parents – an invaluable source of tips and advice (

Cyclesprog is an excellent source of advice, blogs, and equipment reviews for cycling with families  (https://www.cyclesprog.co.uk/)

Where do you cycle with your children?

Alex tends to keep his rides local and he wouldn’t ride with his family on the same roads he commutes on. As a family they used to use the Lee Green Low Traffic Neighbourhood (LTN) as part of a route to Blackheath and Greenwich before it was recently diminished; and because the A21 is a challenging barrier to cross, they don’t go to Ladywell Fields, Peckham etc. Crossing railway lines is challenging because even where there are bicycle rails, they are often too close to the sides to be easy to use. They keep their rides to quiet roads and parks such as Chinbrook meadows.

Better cycling infrastructure would definitely make things easier and allow more families to cycle but there are some great family-friendly routes; Alex, Emma & Ethan like riding through Lee Green and Lewisham to Quietway 1 [from Greenwich to the South Bank & beyond] or once they’re in Lewisham, the Waterlink Way is a great route too.

Anna’s family ride to Sydenham Hill (via the ex-Lee Green LTN when it was there), then onto the South Circular; Anna would love to see a cycle lane on the South Circular, which would encourage less experienced cyclists. As a family they love riding to Beckenham Place Park and get there via the Downham Woodland Walk. Sometimes they ride along the river to Sydenham Hill Woods and Ladywell Fields. They go a fair way east too, to Footscray Meadows via Chislehurst.

Cycling with his daughter, Mike found himself actively avoiding streets busy with queueing vehicles, and even more strongly avoiding streets with fast-moving traffic. In general, he found drivers tended to notice the baby seat on the back of his bicycle and drove somewhat more cautiously than they might do if he was cycling alone.

For now, they tend to make quite short trips together by bicycle. Given we have been in lockdown, this has tended to be to local parks and playgrounds, where Iris can get out and roam around.

Lewisham Cyclists also have a cargo bike which is available for our local members to borrow and try out free of charge. To find out more, email us.