From Farthing Down through Surrey and Kent 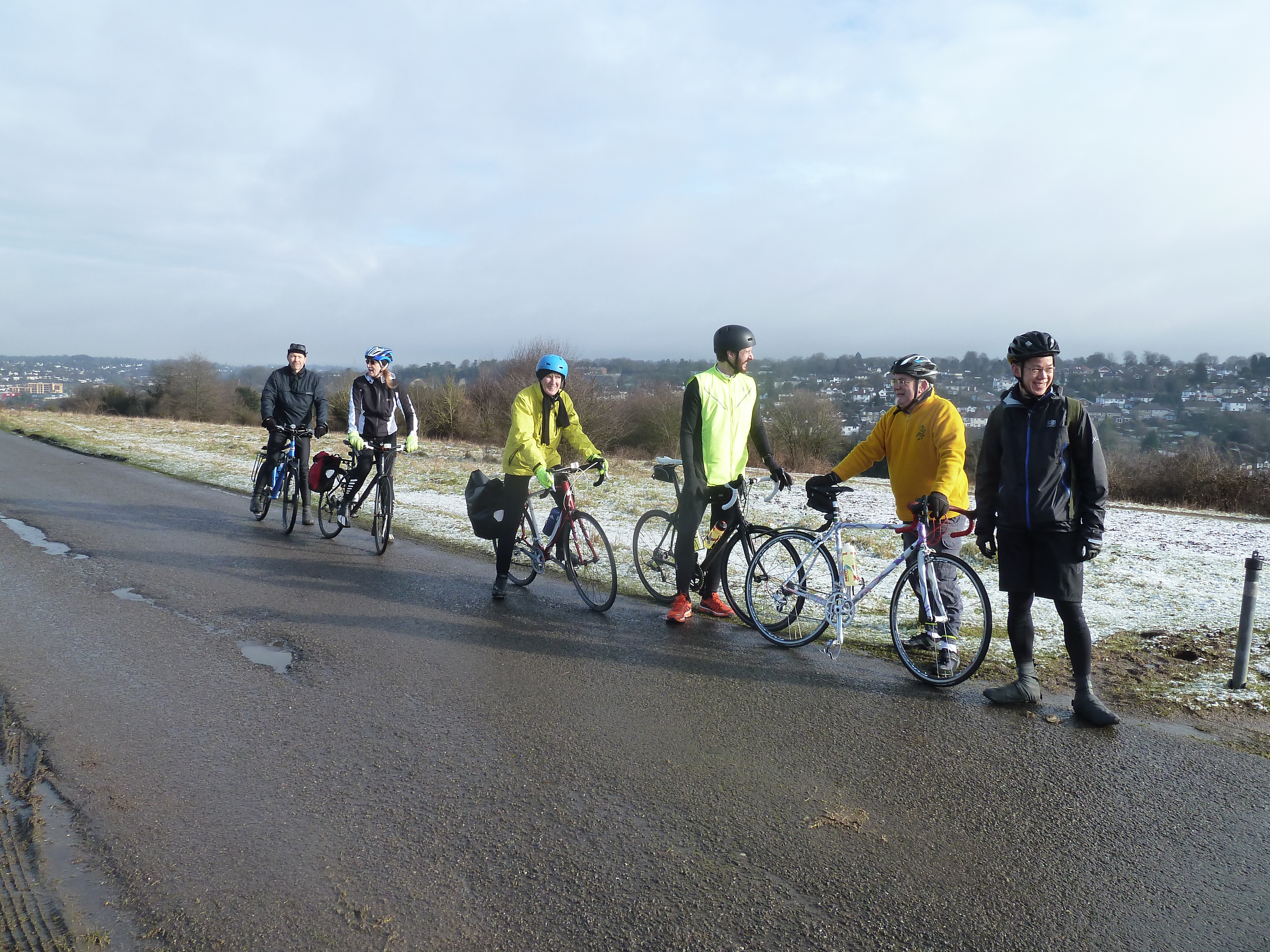 When I woke up and looked outside at about 6am this morning I groaned quietly to myself.  Heavy rain was falling and it was bitter cold.  If I hadn’t been leading a ride I would have left the bike under the stairs, made a log fire up and settled down with a pot of hot coffee, breakfast, then a book by the fire.  As it was, I finished the ride preparation I had left incomplete last night, had a shower, breakfast and packed my saddlebag.  By then, the rain had stopped and shreds of blue were visible in the white shroud of a sky.  But still freezing cold.
By the time I left home, I had already received half a dozen texts from people who had decided they were not riding with us after all. At Norwood Junction, I was joined by five braver (or at least more optimistic) souls and we took the short train journey to Coulsdon South, which enables us to miss out the busiest bit of the A23.
At Coulsdon, one more tough individual (or foolish optimist, if you prefer!) was waiting for us, rather than the five who had said they would join us there.  Never mind.  Their loss, I thought to myself as I led us out up the few yards from the station, under ever brightening skies and a strengthening sun, to reach the short climb, over a cattle grid,  that is Farthing Down.  And this morning it looked beautiful as usual.
The dull skies were fading fast, swept away by the clean, sharp blues of a winter sky, the sun breaking through what little cloud was left.  And up here it had snowed, a dusting of white swept across the Down. We stopped at the top of the climb to take in the view for a few minutes. Then on, past Chaldon with its pretty churchyard. Signs of spring were clearly trying to tell us that Spring was on its way, even if the day itself had decided it was most definitely a winter one.
Soon we were heading downwards, along Hilltop Lane.
There were a few patches of melting ice on this descent, so we had to take care.  At one point, I felt my back wheel catch a patch, and skid dramatically right wards.  I had been using the rear brake lightly at that point, not wanting to descend the hill at full pelt given the conditions, but released the brake quickly (it wasn’t doing any good anyway!) and just let the bike go with the slide, shifting my body weight to try and bring the bike back in line.  Luckily, this technique worked and I was soon back on track.  Mind you, I had been heading for the hedge at the side of the road, so, had I come off, my fall would have been nicely broken!  Everyone else came down the descent safely.  There were, in truth, only one or two patches of skiddy stuff.  And from there on, none at all.
We made our way to Bletchingly and then turned off to take the easy way up Tilburstow Hill, where we paused to take in our second view.  Then down the quiet lanes that take you to the peaceful hamlet of Church Town. After that, a quiet lane over the main road and the motorway and then more up, this time Gangers Hill.  Which I normally hate.  But today, while I didn’t get to love it, it didn’t feel quite as bad as usual. And the reward for that climb is a ride through ancient  Surrey woodland, snowdrops peeping through the dark earth, a view of the wide plain glimpsed through the bare trees, a strange sensation of peace and stillness, yet the distant hum of the motorway still there.  It’s an experience unique to rides in this area, with little reminders that we are only a few miles from one of the busiest cities in the world while travelling through landscapes that seem many more miles and years distant.
After this climb, we were up on the ridge of the North Downs. One of our group decided at this point he had had enough, admitting that his trainers weren’t really quite up to the job of keeping his feet warm on this bitterly cold day, despite the blue sky and sun.  Realising he knew his way back from Beddlestead Lane, which we were soon to pass, he planned to leave us there.  So, after a rolling ride along the ridge, I pulled in at the turn, where we said our farewells and waved him off.
The rest of us continued on, passing the wooden sculpted sign that marks the border of Surrey and Kent.  The  broad plain of Kent was clearly visible today. Then we hit the descent off the ridge and, despite me knowing this road really well, having ridden it more times than I care to remember, I still forgot to change down a good few gears before the left turn. Which you need to do unless you swing straight off the descent into the turn.  I had  to stop to make sure no one missed the turn, though,  and then we all stopped, so we were all in too high a gear to carry on up the steepish bump that takes you on to the Pilgrims Way.  So, six cyclists had to pootle off on the opposite turn for a few yards to get in the right gear to get on to this little road! But once there, what a glorious few miles!  Sun, blue sky, almost traffic free road rising up and down, following the contours of the North Downs.  I have ridden this road hundreds of times now and am still not bored with it.  As I rode along, I got that rush of well being and euphoria, that riding my bike often brings, especially on roads like this..there’s probably a scientific explanation to do with hormones and chemicals I guess, but who cares.  It feels great, and is one of the things that will keep me riding my bike until my legs stop working.
We were heading for Sundridge Hill to get the most riding out of this road.  This time I shouted a warning to change gear well before the left turn.  Again the road rises straight after the turn, so you need that low gear, straightaway. People were ready for a break now, and I considered at the top whether to head straight for Cudham and the Blacksmith’s Arms, or take my short detour down the little rollercoaster of Shelley’s Lane, that I love.  In the end, no one actually said no, so off we went.  If you hit this descent right, and build up enough speed you can get up the steep climb opposite, that stares you in the face as you descend, almost with no effort.  Almost.  If you hit it right.  And fast enough.  As it was, we all got up the other side without walking, but we all had to pedal a little hard at the end of the climb.
A few yards further on, we were treated to a crystal clear view of the Shard, the Gherkin and the rest of the City, a good thirteen miles away from the quiet country lane we were riding.
Now, we were finally really near the pub.  And very welcome it was too.  With a warm log fire, enough room for us all and a good meal to restore the calories lost on the hills.
After lunch, we only had about 12 miles left.  One wild descent from Cudham, a steep climb back up,  a bit of a climb back up from Downe, and then down Jackass Lane and Gates Green Rd.  As you glide down these lanes, a view of the Shard and the City appears again, only to disappear quickly as you lose height.  And the skeletal spire that marks out Crystal Palace let’s you know you are getting closer to town.  Then, suddenly  we were in West Wickham, back to suburbia.
From here, it’s busier roads back to Lewisham with a short respite at Shortlands, where you can head down to Beckenham Park. On these roads, people began to peel off to take different routes home.  Finally, I headed up from Ladywell alone, to Peckham first, on an errand, before heading home to a hot bath and coffee.Thanks to my six fellow riders…without you I would probably have gone home and missed what turned out to be a terrific winter ride, one of the best of the season. By the time I got home, I had covered around 50 miles and enjoyed every single one.