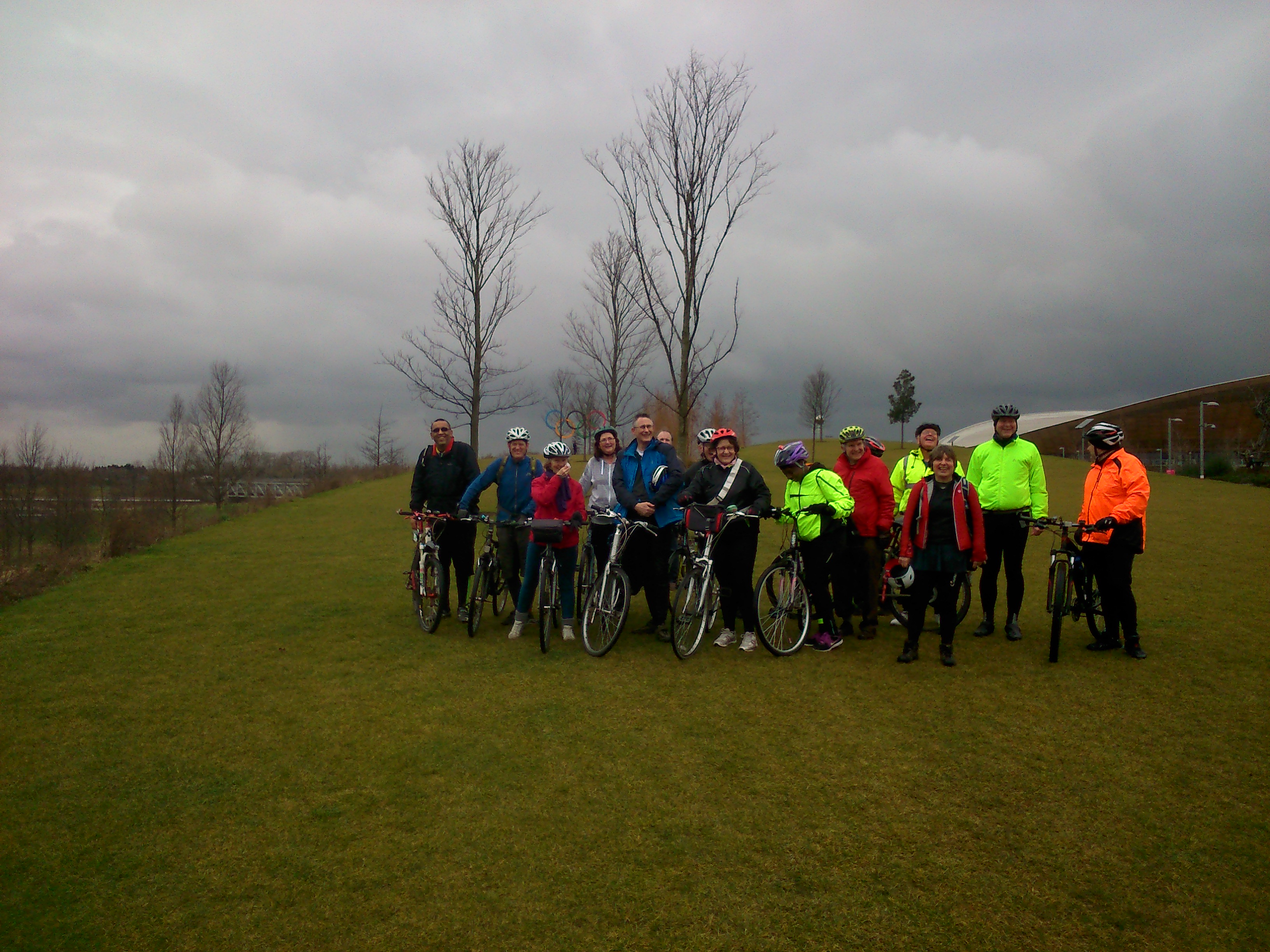 There were already people waiting in Le Delice cafe, our friendly meetpoint in Ladywell, when I arrived for my breakfast at 10am. By the time we rode off on the Waterlink Way towards Lewisham half an hour later there were 16 of us. Three more at Greenwich, including one who had just missed the Southwark Healthy ride and decided to join us instead.

We managed to cram about 16 bikes in the lift. A couple walked down the stairs. At the other end, I joined them going up the stairs and the rest met us at the top. A final rider was waiting for us there, so 20 of us headed off, riverside.

There is still one point where the Thames Path spits you back out on the road around the Isle of Dogs, for a few yards before you can access the riverside again at Arnhem Wharf. On my ride out to Essex on Thursday, I had come this way too and warned everyone that there was a short road closure ahead so they should be prepared to walk on the pavement. However, although the road was still closed to cars, the two massive holes in the road spurting huge jets of water that I had encountered two days before were gone, the holes filled and just a few easily negotiable cones left to block the path of any driver who turned up.

Back on to the riverside, then off through Limehouse and across the busy Commercial Rd. It’s a bit fiddly using the cycle crossing here with a large group of riders. But we managed, rode past the imposing old Seamen’s Mission here, up Salmon Lane and over the canal.

Lots of little back roads in Stepney now, past the Mercers Cottages,  Passing the old church and churchyard here it feels as though you have ridden back in time a couple of hundred years, for a while.

On through Stepney, past many of the sites we visited on our East End Anarchist ride last year, such as Sidney St, Jubilee Rd, once the home of many an anarchist or Communist revolutionary and one of the places where Stalin is rumoured to have stayed while attending the London meeting of the Russian Social Democratic Labour Party in 1907  as well as the old hostel, Rowton House, where Jack London, author, also stayed.

After crossing Whitechapel Rd we headed up Vallance Rd, more crowded and busy than the roads we’d travelled till then. But once in Hackney, we were back on quiet roads and traffic free paths. We passed the famous cycle counter on Goldsmith Row  and bypassed Broadway Market, stuffed with stalls and shoppers today, to reach the Hackney version of Look Mum No Hands.

It was big enough to take all twenty of us, despite my worries. It did take them a bit of time to get us all served, they were busy, but everyone enjoyed their food immensely and we left an hour later, well fed and watered

Through Hackney across Well St Common into Victoria Park and down to the canal for a short stretch till we reached the Olympic Park. We had ridden into a short sharp shower, but our riders laughed it off, refused my offer to find shelter and headed down to the waterside for a circuit of the park. All smiles while a brief shower passes over the Olympic rings

The park keeps changing as they seem to update a different bit every month and some bits were closed so it took us a while to find our way back out and down to Stratford. But this gave us a chance to see all of the sights.  Once you head out of the park on the rather idiosyncratic cycle paths (unforgiveable, really, that they aren’t the best they could be, given the designers had a complete empty site with as much space as they needed) you end up on Stratford High St.  The Greenway is closed here so we had to take the winding Rick Roberts Rd to join it further along.

We took little quiet streets to Canning Town, crossed over on to the Cycle Superhighway and followed that all the way to Poplar. The crossings of the major road systems here proved somewhat lengthy with a big group of riders using the cycle bypasses. But we did eventually reach the swing bridge on the Isle of Dog’s east side and back to the riverside path. In no time at all, we were in Island Gardens, heading into the tunnel and back to Greenwich.

Here, a few riders left us to head home while the rest of us headed back to Lewisham and Ladywell using the new bridge over Deptford Creek and the good old Waterlink Way.

Another good mix of riders, regulars and new, friendly and great fun to ride with those 23 odd miles through our ever hanging city.

Next week, it’s a harder, hillier and longer ride out in Surrey and Kent. Check the calendar for details. However, if these shorter, easier London pootles are more your style, we’ll do another in March.  Keep checking the calendar.