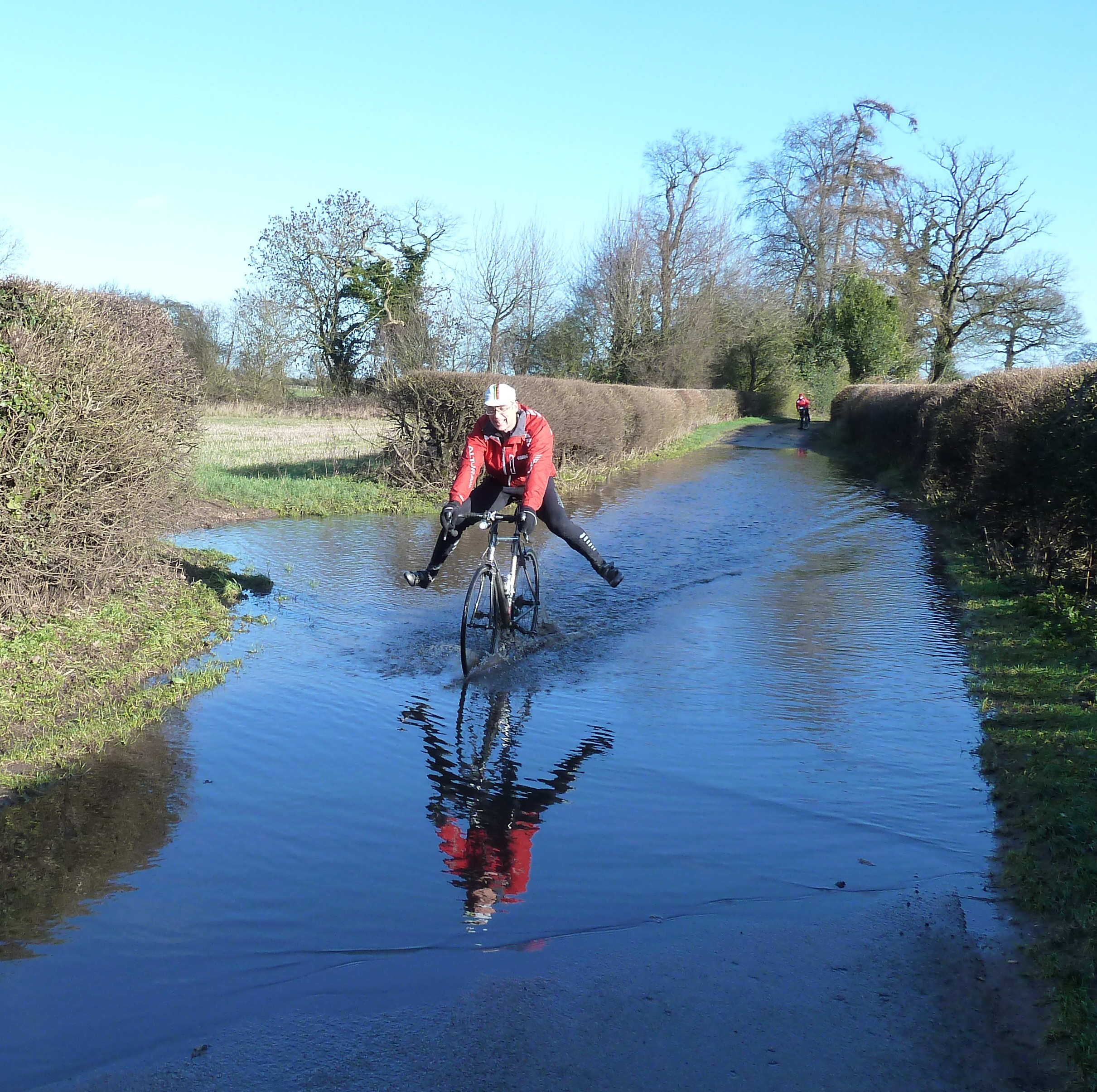 Felt like a great day for a ride as soon as I headed out down Peckham Rye. More cool spring day, than mid winter morning. Two fellow riders at the library, and together we headed off for the riverside at London Bridge, then a short Bankside trip to Blackfriars. 2 more met up with us and the five of us managed to get return tickets to Harpenden for less than a fiver each. Bargain. less than 40 minutes later, we piled out of the station to meet Adam and Rebecca. Soon the seven off us were off.
Adam’s local knowledge was useful… I had a route but had only ridden it once before. Finding the Nickey Line, the old railway cycle path I thought would get us to Redbourn traffic free, and getting us out of Redbourn too, would have taken us a lot longer with just me navigating! As it was, Adam made sure we took the best routes and pulled me back quickly from a wrong turn.
Then we were on quieter roads, Gaddesden Lane, Gaddesden Row and Ledgemore Lane then up Piper Hill. A couple of flooded roads, one covering the whole road inspired a few different crossing techniques. Wheeee! Adam employs one of the more successful flood negotiation techniques we used that day.

Soon we were riding along a sweeping ridge towards Ivinghoe Beacon. We stopped on the ridge to take in the view for a bit. The group demonstrating one of my ride leading techniques!

Then on past Ivinghoe Beacon, into Ivinghoe village and then on through Cheddington, past Mentmore Towers, once bought for the Maharishi Mahesh Yogi by Beatle George Harrison, later the home of the Yogic Flying Natural Law Party. We know our place.

Further on, over the Grand Union Canal, to our lunch stop, a fifteenth century village pub in Slapton. As we headed off again after lunch,  the blue sky and sun began to yield to grey clouds and the wind began to gain intensity. By the time we waved goodbye to Rebecca, just past Eaton Bray, there were spots of rain in the toughening breeze.

Then the toughest climb on the ride, Bison Hill, which took us past Whipsnade and then down into some very quiet lanes and valleys, beyond Studham…low valleys meant more floods and opportunities to hone our flood negotiation skills. We were doing pretty well until we met one in a dip in the lanes between Flamstead and Redbourn. Nobody in the group managed to get through it with dry knees, let alone feet, much to the bemusement of a van driver waiting for us to pass before driving through.
Luckily, we were now not far from our startpoint and train home. With just three miles remaining, I heard the tell tale intermittent hiss of air escaping from a tyre somewhere. We were in Redbourn, stopped and, with all the group working to help, the offending flint was found, removed, tube changed and tyre reinflated efficiently and pretty quickly. Final few lanes were ridden as darkness fell, bringing even more interest to a ride that had been full of variety.

After 47 miles we were back in Harpenden, and just a few minutes to wait for a train. Just a bit more than half an hour later and back in Central London.