Knatts Valley: A hint of Spring.

Thirteen of us met up at or outside Le Delice on a beautiful morning. Almost spring like, but for the ice in the air and still a few patches on the ground.  But the warmth of the sun above was already melting those and we soon headed off through Ladywell Fields with a message that two more would catch us up in a bit.

Past the Nordic walkers warming up outside the park cafe, carefully through our lovely park, ducks out on the river, dogs out on the paths being walked by chatty and cheerful owners sharing their dog stories with each other. Heartening to see lots of small children out on bicycles too.

Backstreets of Catford took us up past Mountsfield Park through to Hither Green and then across the nasty old South Circular out down Burnt Ash Hill and further south to Mottingham and then on through Chislehurst which could be such a lovely little village with its pretty green, lined with lovely old buildings and attractive old pubs. Sadly, the motor traffic is so busy that its hard to fully appreciate the village, as one’s cycling brain has to be fully tuned in to the traffic and how to deal with it safely.

Then, Leesons Hill. A good urban descent which fires up the brain and shakes off the motor traffic which can’t really compete with a bike in this direction.  Straight through St Mary Cray on to Star Lane.  My fingers were crossed that we wouldn’t encounter the same ridiculous level of flytipping  on this great little route out into the Kent countryside as we had last year. Back then,  the piles were so high and wide, the council had closed the road and we were forced to dismount, hoik our  bikes on to shoulders,  and climb up and over the mountains of rubble, junk, broken furniture and even, rather scarily, asbestos scrap.

Luckily, Star Lane was clear, just a few telltale scraps of junk hanging about on the verges. We rode straight down and out into the Kent lanes. 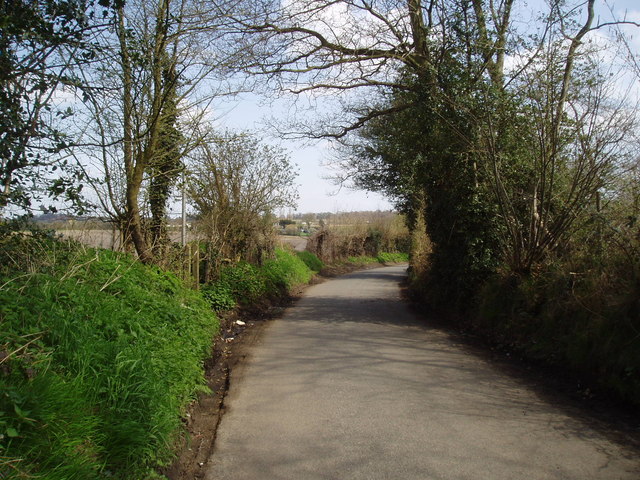 You could finally believe Spring, if not actually yet here, was on its way. Warm sun and blue sky above, birdsong, leaf buds on the bare branches.  We rode through Swanley, South Darenth, Fawkham Green and then on through a tangle of wooded byways that curve back on to TinkerPot Lane delivering us to the southern end of Knatts Valley Rd.  It takes a while to ride through the trees, hedges and golf course before this lane opens out to the big skies and open fields that stretch up wide each side of the valley.  Suddenly you feel you just have to push down hard and go for it.

High up above, as I flew down the valley’s gentle gradient, I could see a buzzard chasing a crow, and fail to snatch it out of the sky, as the crow’s companions suddenly appeared to mob the bigger bird and drive it higher up the valley. I felt a million miles away from Londons urban crash and noise. Yet in reality its only about twenty miles from the city centre. 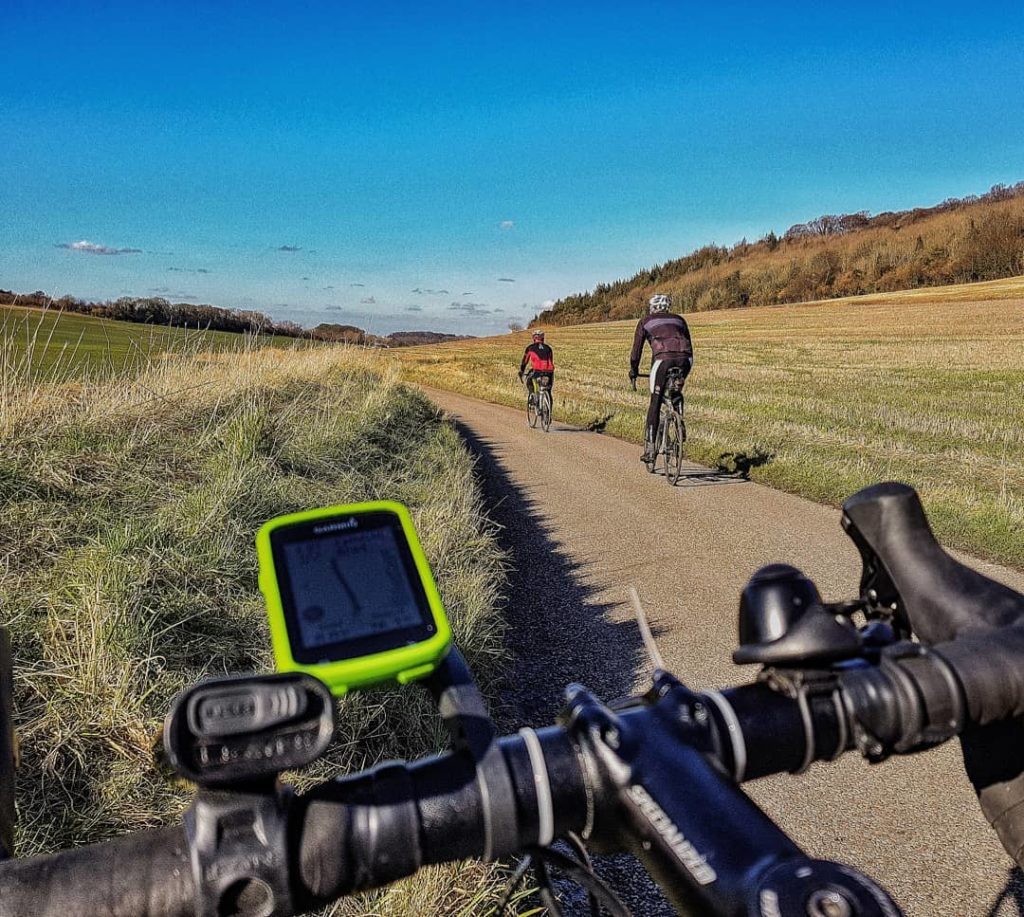 Knatts Valley. Off they go!

Three miles later we all met up at the junction with the A225, crossed it and headed through charming Farningham, past The Red Lion pub, where we have stopped many times on summer rides,  to sit outside by the river in warmer weather, and then we headed up to Sparepenny Lane, to ride that little ridge which gives such a great view of Eynsford Castle.  Down to the village itself where we had planned to indulge in a bit of tea and cake.  Which proved harder than expected. It was such a lovely day, many other folk had the same idea.  The pretty ford was too deep to ride through today and the village was busy with bikes and cars containing many other cake eaters.  We eventually split up, some going to The Plough by the river, now rather a smart, upmarket gastropub. Rather than the old cheap local I remember from twenty years ago!

Others, including me, got a takeaway coffee and cake and sat down by the riverside, legs dangling over the bank. This gave me the opportunity to reminisce about bringing my daughter here twenty years ago, bikes on trains at Catford, to buy a fishing net at the local shop, paddle in the river, catch little fish in jam jars, eat egg and chips in the pub, let the fish go, ride our bikes up to Lullingstone and back and then get the train back to Catford.

We finally regrouped and headed back up to Sparepenny Lane, taking the turn off this time to Crockenhill and the ride back to South East London.  Over these few miles, our group got smaller and smaller, as folk peeled off in ones and twos to take their own particular routes home.  By the time we zoomed down the A21 out of Bromley to Downham, the original 15 had whittled itself away to 6. We finished our ride through Beckenham Place Park, then alongside the  Pool River and finally back to Ladywell fields.  And a couple of happy hours winding down in that well known Tavern of the same name, nearby.  Great ride, lovely people to ride with. As always. A day that makes you really appreciate your bike!

Thanks to Fiona McKillop for the Knatts Valley photograph. And to Sarah Charles for a couple of others.  A couple I pinched off the internet and couldn’t find an owner to credit.  Whoever you may be, thanks.