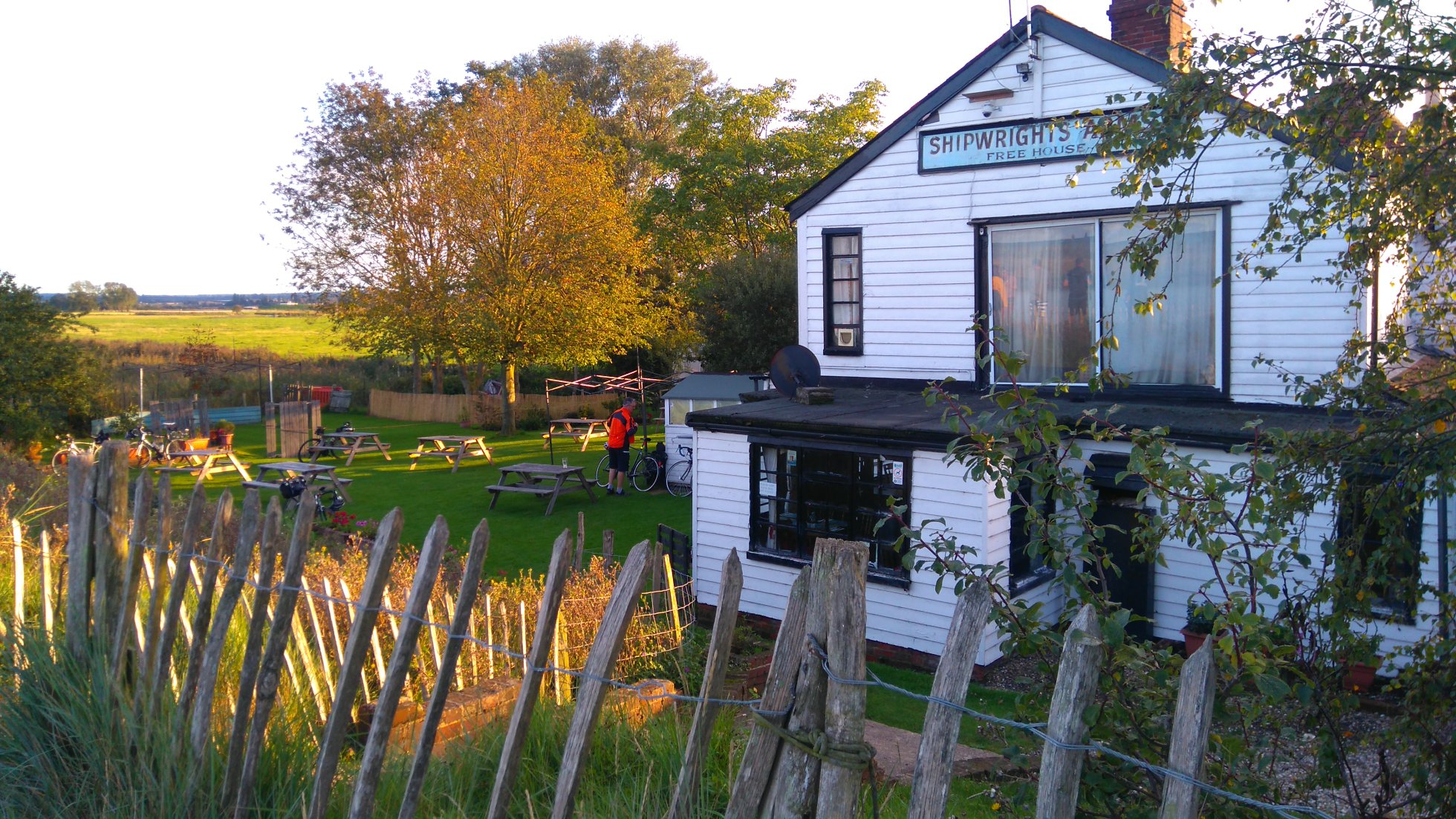 For a few years now, I have been riding down to the Shipwrights Arms at Hollowshore on Faversham Creek, in late summer or early autumn. It was Barry Mason who first introduced me to this place, as it quietly sits in one of his favourite areas. In fact, until I met Barry and began riding behind him around those little corners of the South East that he knew so well, I had been pretty much ignorant and a little dismissive of the flat, lonelier parts of Kent. I was still a mountains, moors, hills and high places sort of person and it was Barry who showed me that there were more interesting places and people within a few hours riding of my own front door than I had ever realised, and taught me the routes to explore and appreciate them.  Thanks Barry.

Lewisham Cyclists route this year began with coffee in Ladywell and then 9 of us headed through Ladywell Fields, Catford, Beckenham Park, where we picked up another rider, and Shortlands, quickly through the backstreets of Bromley to Norman Park.   Here, there seemed to be an unusually large number of cars turning into the park and we soon realised there was some kind of running event going on. Luckily it hadn’t yet started so we exited the park reasonably easily and continued our journey through the suburbs. Another rider tagged on as we passed through Petts Wood station car park and it wasn’t long before we were flying downhill off Poverest Rd, and en route to Crockenhill.

I hadn’t expected as many as 11 riders. Bromley Cyclists were running a train assisted version of this ride from Otford Station and quite a few folk had said they would head out with them. Understandably, most folk don’t relish London suburb riding and the chance to miss out these busy streets by using trains is often welcome. So, more than 10 turning up for extra miles and hills was a good number, enough to share a bit of on road banter and chat, but not too many for a ride leader to worry about dropping people off the back or losing folk at turns. And indeed, our pace was pretty much uniform throughout the group (although I admit, I was leading from the back a lot!)

We crossed the M25 soon after Crockenhill, bypassed Eynsford to head down through Farningham and up the Knatts Valley. These are lanes we often use on a return from a Kent ride back to London, and it was interesting to ride them the other way. The views are different, and you often notice things you have missed before.

I had hoped to use a byway as a useful shortcut which would have avoided a mean, steep extra ascent at the end of the Knatts Valley. However, leaving from the back has its drawbacks. The speedy ones riding off the front had been fairly well behaved and were stopping and waiting whenever a turn looked possible, but they failed to spot the byway, shaded by trees. By the time I got there, the two leaders were already on their way up the climb and, possibly due to the grunting and groaning this particular hill tends to induce, failed to hear the calls of their fellow riders. To be fair, as I stopped at the entrance to the byway, it looked far less the friendly, firm track I remembered, and more of a muddy gap through the woods which looked to have been recently visited by several 4×4’s and a lot of rain. So, I decided to follow the fast ones, take the rest of the group up the hill too and rejig the route at the top.

This steep lane, Tinkerpot, winds its way around and every turning seems to sign the fact that you are riding around in circles. Which you are, in a way.   But eventually we were heading south again, one more hill than originally planned, later. This unexpected diversion also meant we had a descent off Exedown Hill to enjoy. It’s a good descent except for one very sharp bend on it. It’s easy to forget about cars as you blast down it faster than the motor traffic. All I will say is, please guys, always remember we don’t ride on closed roads. Always assume there is a big car heading up the hill around that bend you are flying down at around 40mph. And be aware that once actually on the bend at high speed, your brakes are no longer your friend. Always keep to your lane on bends.

After that adrenalin rush, we pushed on down to Ightham, where we turned off on to a steep descent to Basted. Steep and very rough. The surfaces on theses lovely, empty quiet lanes around Kent are noticeably deteriorating with each passing year. And doesn’t your road bike with its skinny tyres let you know it! I quite enjoy the juddering, the slight skid of the back wheel every so often and the satisfying shudder of the bike as you wrest it back into control. Others don’t I know, so they took it more gently. We all regrouped at the bottom before heading up the other side. Now, on the ascents, I was no longer in front, but firmly at the back again.

Our planned lunch stop at the Kentish Rifleman in Dunks Green, was not doing food due to a wedding. So we moved on, through Hadlow, glimpsing it’s odd folly tower on the way, to East Peckham, and towards Yalding. The signs for Teapot Island reminded me of the pub and tea room there which I used to use regularly maybe 15 years ago when riding these roads with my daughter. We used to put the bikes on the train to Paddock Wood and ride the some of the few flat roads Kent offers in this area, clustered around the river valleys of the Medway and Beult. (From these humble beginnings came Lewisham Cyclists Flat Kent Ride). Much easier for a nine or ten year old than tackling the North Downs nearer our home. And then we’d head to Teapot Island for egg and chips in the Anchor Pub, or bread pudding in the cafe next door. I decided we’d go here for lunch and the group split between the pub, on one side of the river and the caff on the other.

About 40 minutes later as a group of us sat in the sun by the river, in the caff garden, in waving distance of those who plumped for the pub, in the garden on the opposite bank, we saw another larger group of riders arrive. It was the Bromley group, who had set out from Otford after us.

We left them waiting for their lunch to be served and restarted our journey, over the river bridge and on through Yalding to retrace a little bit of the route we took the previous Saturday on the flat Kent ride. But whereas that ride follows roads that never turn North towards the line of the Downs, this route winds eastwards along gentle flat lanes south of Sutton Valence for a while, but eventually has to make the turn seawards. And to reach the sea, that line of hills has to be crossed.

There are several ways to ride up and over. We chose to ride through Grafty Green up Liverton Hill on the Headcorn Rd.   At the top we stopped to regroup and I picked what must have been one of the last damsons left on the trees around here. Delicious! A few of the riders at the top of the penultimate hill.

Then downhill to Lenham. Here we decided to stop for tea at the old tearoom in the village square. The staff were lovely, serving us outside in the sun, not at all fazed by eleven people all ordering at once, paying separately (which seems to confuse and annoy many tea shop owners and landlords) and even putting up good naturedly with Danny’s banter. I must try and configure more rides that make this tearoom a useful stop. We left the village behind and climbed up one last hill before beginning the final sweep down to the empty marshlands that skirt the sea creeks on the edge of this part of Kent. The leafy orchards, heavy with bright red and green apples and pears, the farmland fields dotted with rolls of hay, bound up ready for winter, the hedgelined lanes, small villages, Doddington, Newnham, we passed them all, rode beneath the M2 towards and then all this was now left behind, quite suddenly, as the wide marshlands and big skies opened up to our left. Once through Oare, we picked up the road that heads north east just before Faversham and soon, the big skies and flat empty marsh were all around us. Strangely, although, having ridden through those orchards, villages, woods, homely farmlands and cosy tree lined lanes minutes before, it feels as though this little corner of Kent at the end of this rough track across the marsh, is miles and miles from anywhere. Big sky over the creek

We quickly found the bar, ordered drinks and parked the bikes, not exactly in that order, and then walked up on to the creek side just behind the pub, to take in the view of the creek at high tide, with the Isle of Sheppey beyond. And here we stayed, chatting, sharing our ride experiences, sipping our drinks till the sun began to dip lower in the sky and we were suddenly reminded that despite the warm sun we had enjoyed till then, it was really no longer summer. A definite biting chill as the autumn evening began to enclose us. Some of our group collected their bikes to head earlier to the station, but as our group grew smaller, Bromley Cyclists began to arrive. We spent a while chatting with them, till they too headed off for a pub dinner nearer the station. Finally six of us were left, enjoying a simple meal and a beautiful autumn sunset, begins we too finally headed to Faversham Station for the train back to London. The Shipwright’s in autumn evening light. View from just outside the Shipwright’s Arms