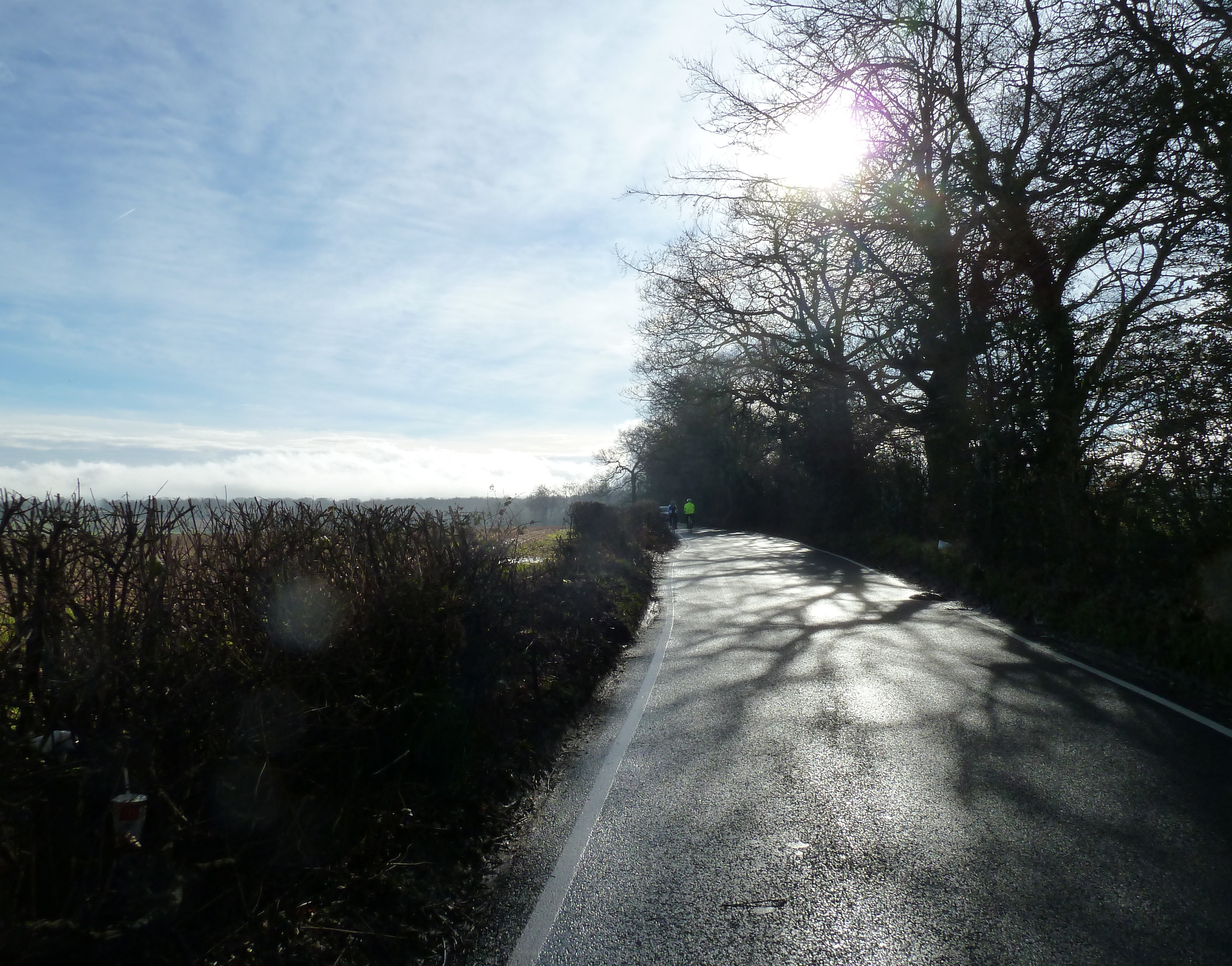 We usually run this ride in the last week of the old year, but this year it slipped a bit and became our first countryside ride of the New Year.  Although, for some if us it was already our third ride of 2015 as we had done the New Year’s Eve ride which straddles the old and new, and, then, as we were still wide awake on New Year’s Day at 9am, we had headed off to Greenwich for the New Year’s Day Ride!

However, Christmas pudding is tough stuff to bust, so another ride in quick succession was welcome.

6 rolled up at Le Delice in time to leave at 9.30 am. At which point, Bob discovered he had a flat. He was ready to go home, but we all encouraged him to fix it, which he did. So we left a bit late, but hoped this might mean we had more chance of the rain clearing.

Although we then lost one after less than 5 miles (apparently due to cold hands) the rest of us continued and enjoyed a good spin out through West Wickham, up the long haul that is Layhams Rd, along Skid Hill Lane (even in the rain we got some great views as always here) then whizzed down and back up Beddlestead. As we climbed up to one of the ride’s highest points, we realised the thickening mist was due to us riding into low cloud. Clark Lane which runs along the ridge here, is a faster, busier road than the other lanes we use out here. Normally it’s not a problem, it’s wide, visibility is good and the views across Kent terrific. However, the thick low cloud meant there was minimal visibility, yet most drivers were not moderating their speed to take this into account at all. So we decided to detour up Chestnut Lane to the Spinning Wheel Roundabout (sadly without a spinning wheel now). The Fatbike rider in the group appreciated the muddy bit of rutted off road this provides at one end.

The rain was pretty heavy at this point,so the consensus was that we begin to head back, rather than head on to the Pilgrims Way and Sundridge Hill as I had planned. Down Buckhurst and New Barn to Cudham church, then a blistering and blustery descent followed by a steep climb and we were in Downe. Which is almost home really….the weather seemed to improve as we descended Gates Green Rd, but only because we had ridden out of the low cloud. A bit of busy fast traffic road after that, till we were almost back in Beckenham. Here, we turned off to head down to Shortlands then into Beckenham Park on its east side, rather than the west side we had taken on the way out.

A short ride through Bellingham and Catford and we were back in Ladywell. No regrets from anyone that we had headed on such a dull, wet day. And all of us looking forward to the extra pleasure of a hot bath when we got home.