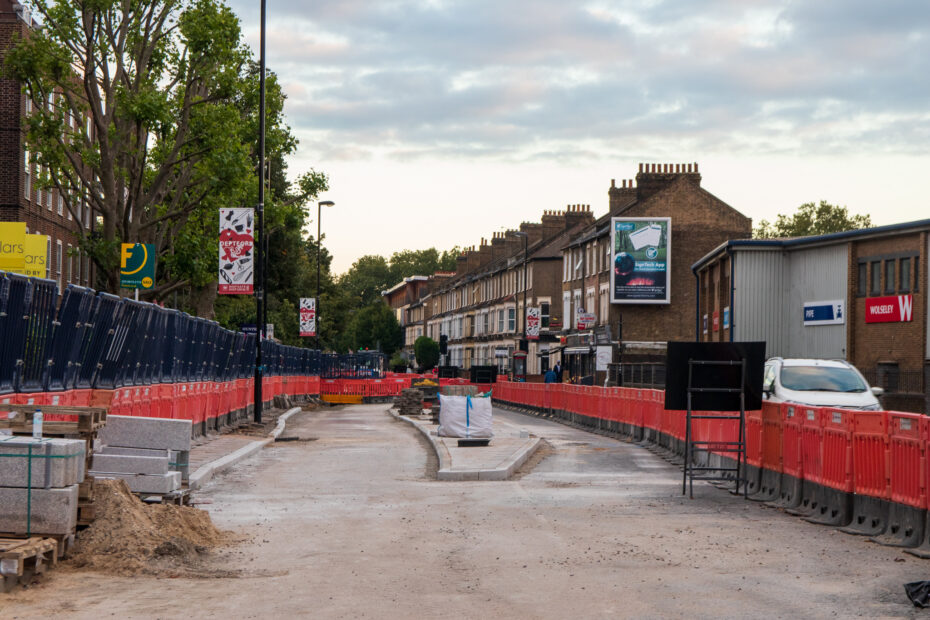 Now well underway, when the scheme is completed next year, it will transform this busy stretch providing a segregated safe cycling route including protection at junctions. If you want to read our previous blog on C4, have a look here.

The Cycleway 4 Project is not just about cycling – there’s a number of improvements aimed at pedestrians and bus users. The Lewisham section adds three new pedestrian crossings on key desire lines and widened pavements outside Deptford Park Primary School, Deptford Park & outside Coral by Princes Street. For bus users the decision to keep busses in the traffic lane rather than taking them out the flow stops overtaking and means that in general vehicles will move at the speed of the bus, which is electronically limited to 20mph.

Paving is also being laid, making it smoother and easier for pedestrians, and a new area of public realm is being created at New King Street. Those who choose or need to travel by private vehicle also will benefit from a full resurfacing of Evelyn Street, & improved street lighting provision as well as upgraded drainage to minimise surface water.

It’s not all rosy though, Lewisham Cyclists are working hard with TFL to improve cycling provision during the construction phase where Evelyn Street is closed eastbound. The current diversion involves at times a six vehicle lane road. We had a successful walk/ride through of the route with TFL & the Met Police with numerous small changes made to the traffic management layout with a particular focus on disabled and vulnerable road users.

If you are going east through the roadworks, (into the closure) we recommend people cycling turn right at the McDonalds and then left into Trundleys Road, before joining up with Cycleway 10 (formerly Quietway 1) at Folkestone Gardens. If you opt to stay on route please don’t cycle along the pavement as this creates conflict with pedestrians, but follow the directions of construction staff & signs. When walking through the route we recommend walking on the southern pavement as this is significantly wider and easier to push your bike along and avoids you having to play several rounds of dodge the lamppost.

Lewisham Cyclists asked the Met’s Cycle Safety Team about their advice for road positioning through the Cycleway 4 Works. The Met could not be clearer in their advice and guidance for cycling through the works (and any similar works). Ride in the ‘Primary’ Position & Take the Lane. If you are unsure about this or want some training / guidance, drop Lewisham Cyclists a line or get free formal cycle training from Lewisham Council.

As of the end of September 2021, work is progressing with street lighting replacement and tree pruning taking place on the southern side of the road between Deptford High Street and Abinger Grove. The main works are taking place at the western end of Evelyn street to its junction with Oxestalls Road, with the first parts of the cycleway beginning to appear. Dragoon Road is also seeing ground work to protect tree roots.

The following pictures give you some idea of progress made this month on Evelyn Street.